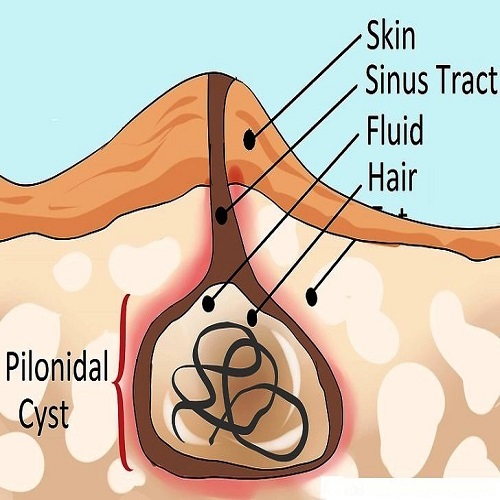 “Pilonidal Sinus“ is an Italian term, which means a nest of hair, highlighting the main cause of the disease – ingrown hair. It’s a less known ailment but is common among young generation, especially males between an age group of 20 to 30. A pilonidal cyst is a cystic structure developed along the coccyx region (tailbone) in the cleft of the buttocks, located almost 4-5 cm from the anus. This cyst is filled with hair, bacteria and skin debris.

More than one cyst may also develop, which later connect to each other by tunnels formed under the skin. It eventually forms an abscess. A patient suffers from a lot of pain and soreness in the particular body part. Even after pus discharge from the cyst, it continues to fill up with detritus leading to re-infection. One must see a Colorectal Surgeon well before the sinus becomes severe. If the cyst is infected, then pus is drained out and the patient experiences fever, pain & swelling in lower spinal region and warmth & redness in the affected skin.

When should you see a doctor if you have piles?

What if piles is not treated?

How does the Kshar Sutra Treatment work?

Fistulas: what is the ultimate solution? Is Kshar Sutra the answer?

What are the signs and symptoms of piles?

Your One-Stop Destination for Piles Treatment

The Best Pile Treatment In Ghaziabad

What causes internal and external hemorrhoids and simple ways to treat them?

Hemorrhoids: what are they?

What Ksharsutra can do for colorectal disorders?

Treatment of Pilonidal Sinus in Ghaziabad

Fissures are grooves, tears, or splits.

Find out how to treat fissures in Ghaziabad

The best Surgeon in Ghaziabad for Pisses, Fissures, and Fistulas

The Best Fissure Treatment in Ghaziabad

In Ghaziabad, you Can Get Kshar Sutra Treatment